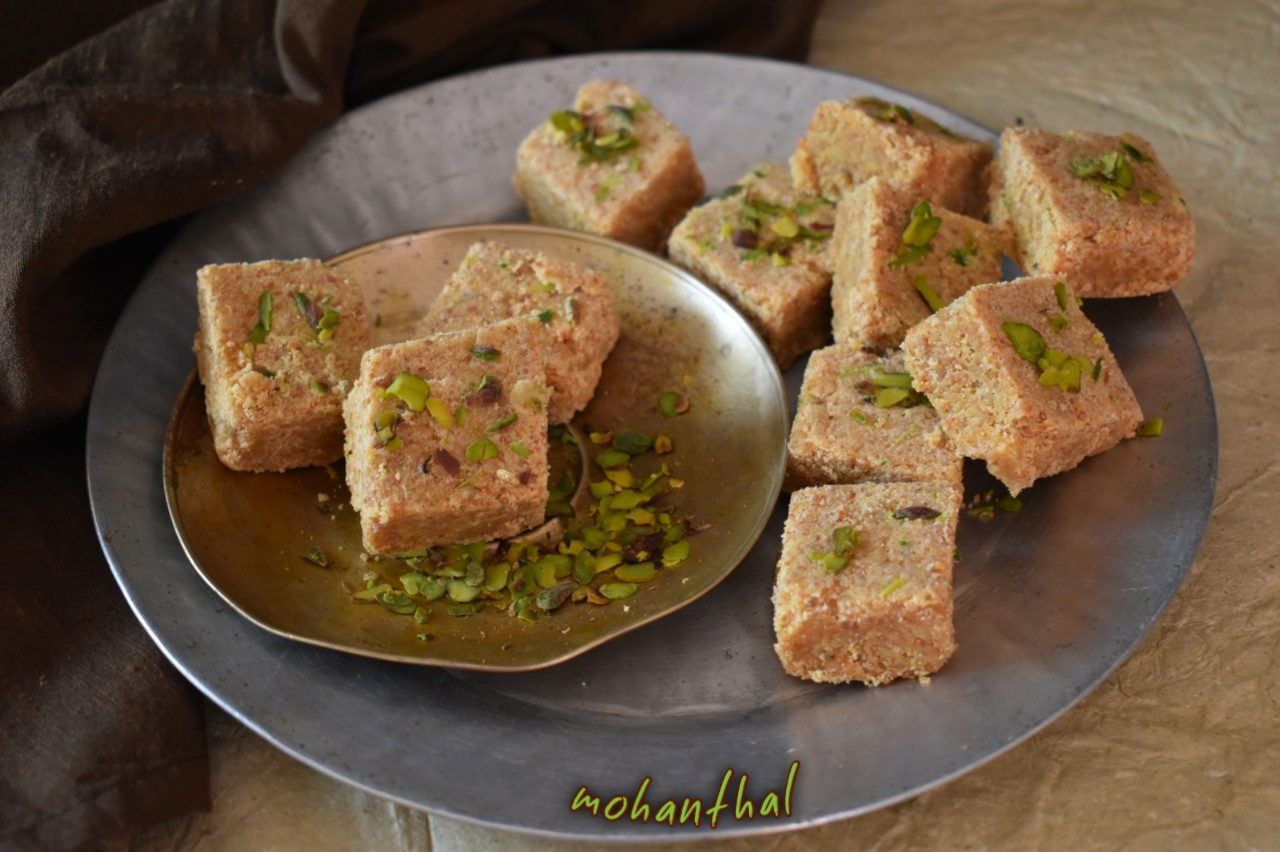 Absolutely delicious fudge made using gram flour (besan), ghee and sugar syrup which just melts in the mouth and keeps you craving for more and more is Mohanthal. The interesting part about Mohanthal is that it has a rough texture, it is not smooth as a barfi but you bite it and it dissolves, it disappears leaving its amazing oomph. I have yet to have just one piece of it, as in I always end up eating more. That’s its magic.  Howsoever I might like it, I would never make it. But during my recent visit to my Mom’s place I learned this delicacy from her. Not all of my recipes have the prefix perfect or best. Few have them, the ones which actually are, as this one… as it comes straight from my Mum’s kitchen.

However, I assure you one thing; it won’t be the easiest dessert recipe but will be the tastiest one.

Let’s talk about the ingredients for Mohanthal Recipe

Well, I have to say this. Gram flour, ghee, and sugar combine to give us so many sweets; such as this… already on the blog is perfect besan ladoo… coming up shortly is Mysore Pak. Let’s have a look at the ingredients:

Gram Flour (besan): Regular gram flour has been used. It is given a given texture by sprinkling milk and ghee mixture on it.

Sugar Syrup: This is the thing because of which I never tried this recipe because I am never sure about those strings :D. But Mom explained it properly and next time I’ll also check it on my sugar thermometer and update. However, in the recipe, we have prepared sugar syrup of 1 and ½ thread consistency.

Roasted Mawa: I have seen plenty of recipes on the internet. They differ from this one in a number of ways; this ingredient is the most important one. The recipe calls for little roasted mawa and do not skip it, you will love its bite.

Me and my family are a big fan of the nutty flavor of gram flour. And belonging to Rajasthan we love eating besan as it is used in many ways. And therefore we have a collection of recipes for desserts using gram flour. View it here.

1.This recipe makes 30-40 pieces depending upon the size. 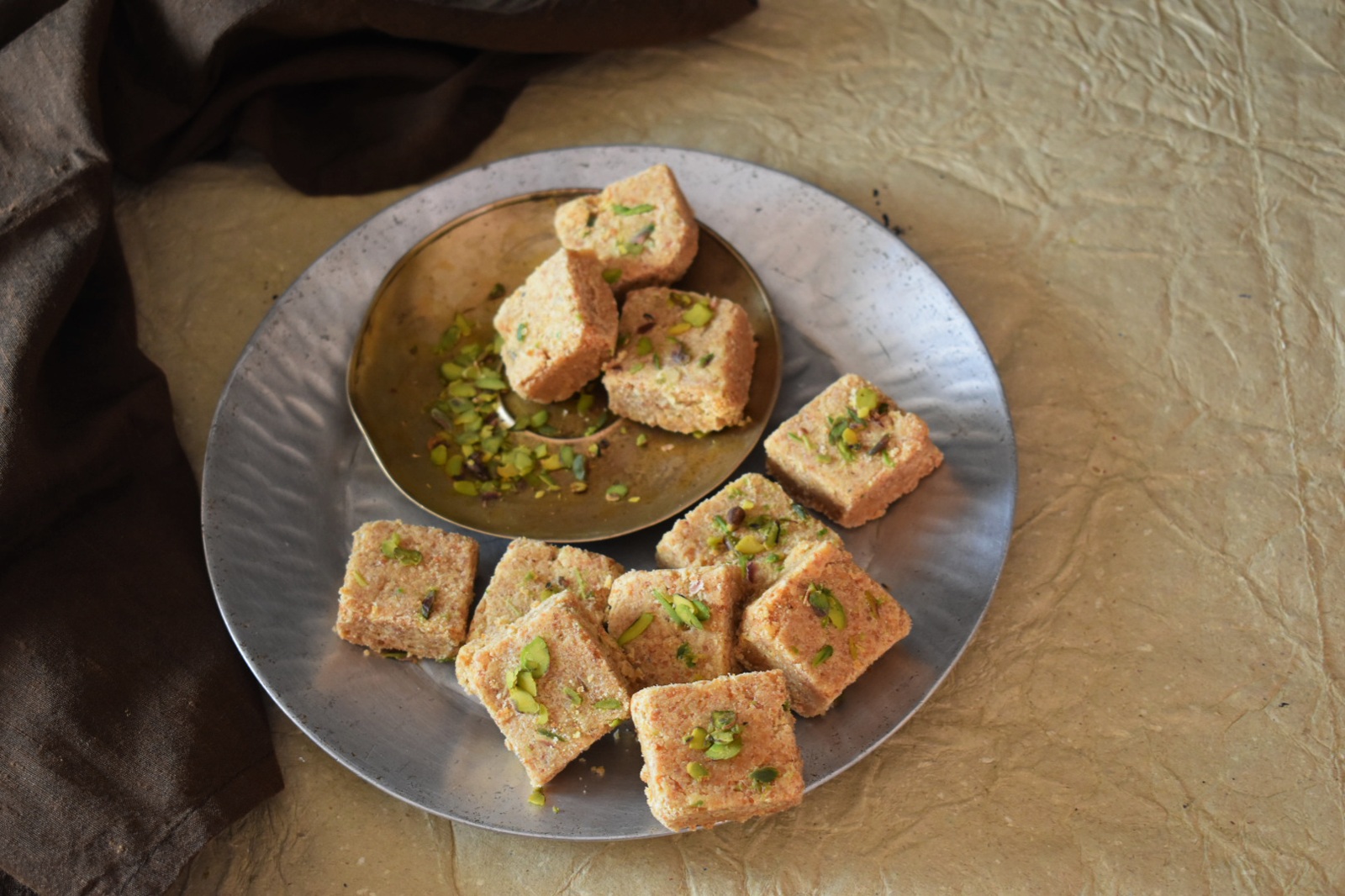 4.Sprinkle the milk and ghee mixture on besan (gram flour).

5.Mix well with fingertips till bread crumbs like texture.

11.Take it out in a plate and let it cool down completely.

13.Cook till 1 and ½ string consistency. Switch off the flame.

15.Next goes in 50 g crumbled and roasted mawa.

17. Continue to mix it till it leaves the sides of the pan. Remember the flame is off.

18.Take it out on a plate. Level it using a bowl. Garnish with sliced pistachios (pista katran) and press them in using a bowl. Let it set till warm. Make cuts. 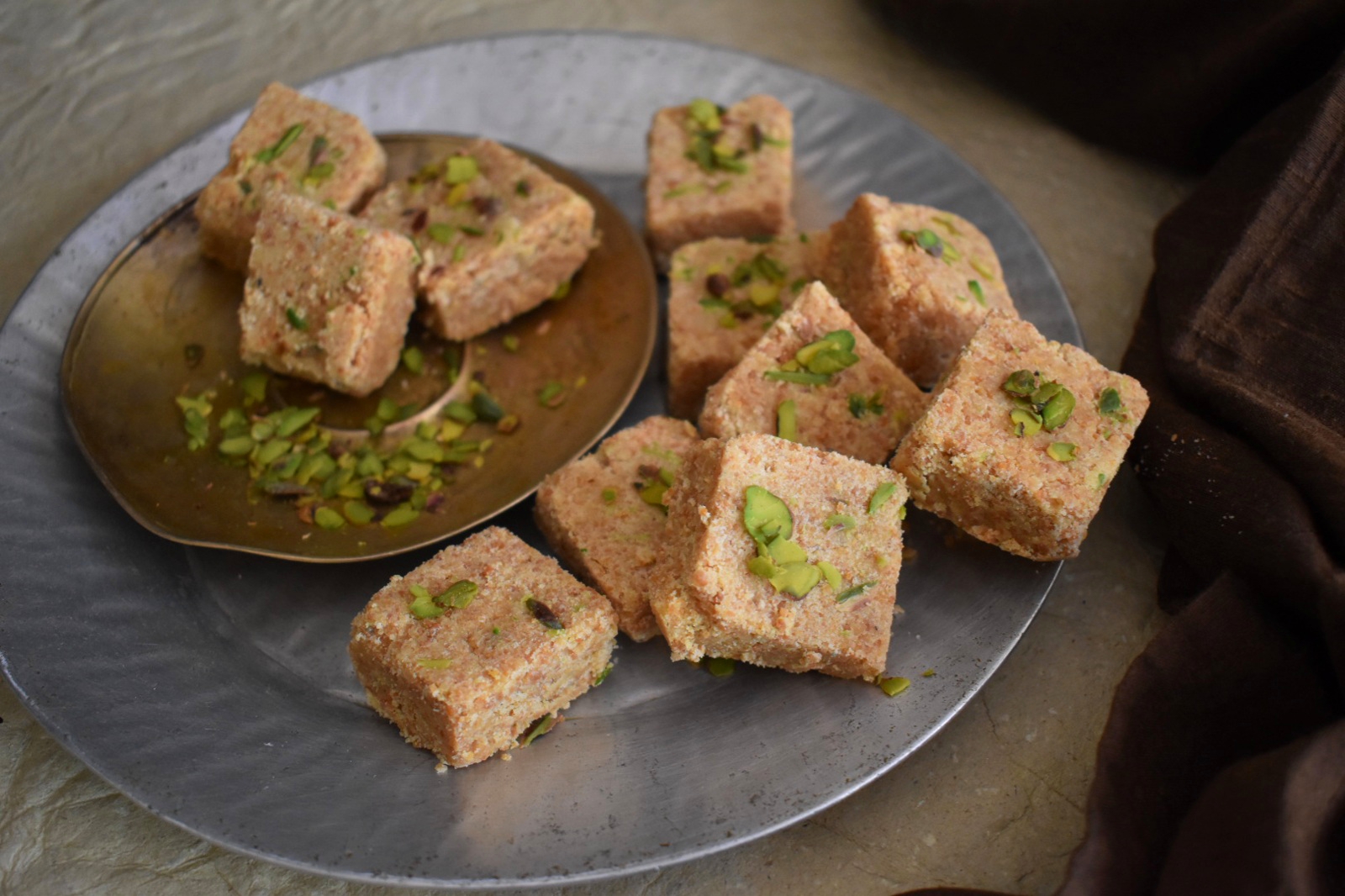 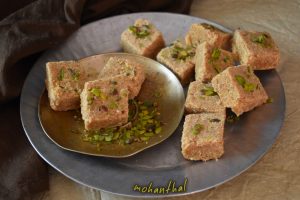 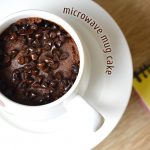 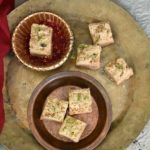 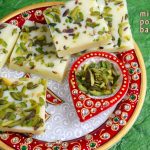 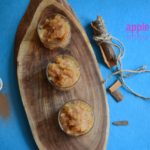