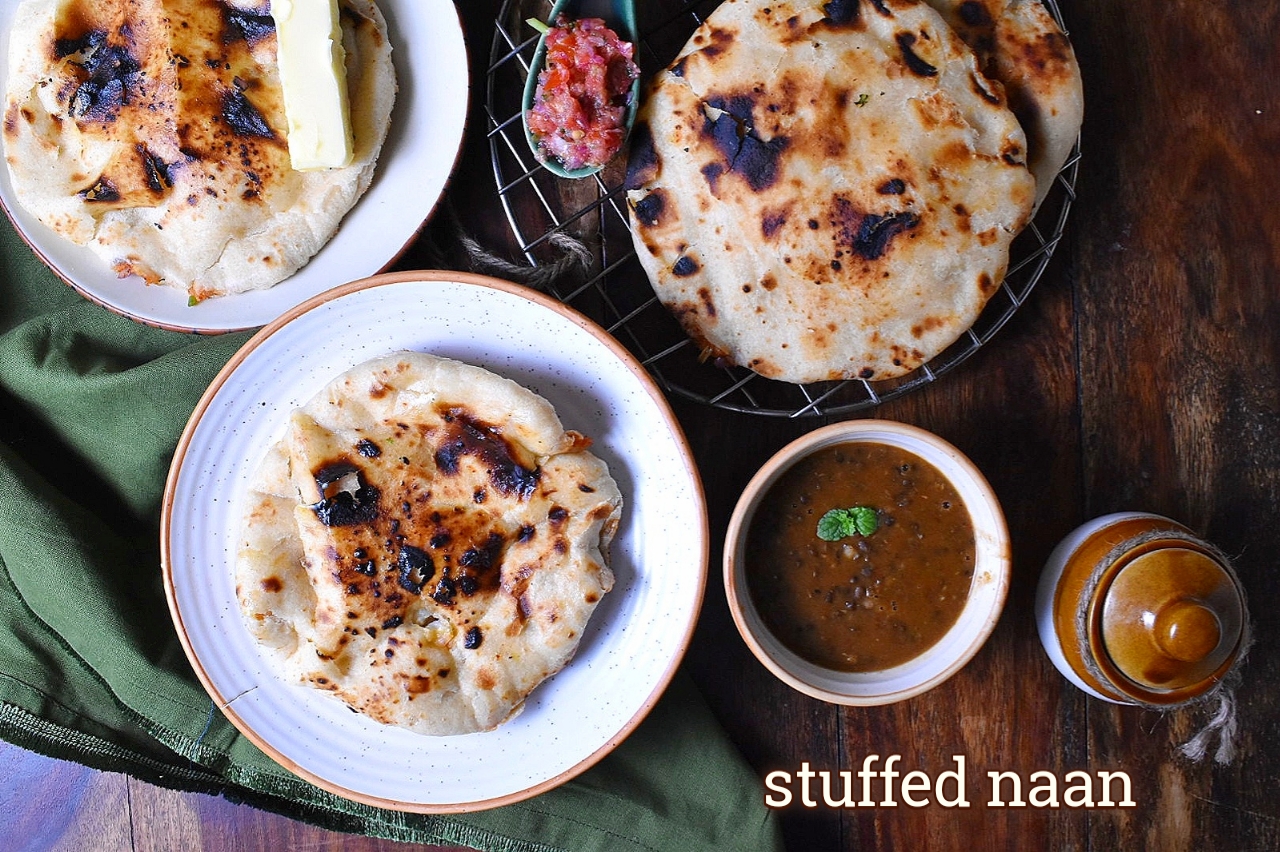 Stuffed Naan Recipe with step by step pictures- Flaky leavened flatbread with a scrumptious filling is a stuffed naan. Generally, naan is prepared using yeast, only all-purpose flour and is cooked in an earthen oven. However, this stuffed naan recipe does not call for any tandoor i.e. earthen oven and yeast. Further, a combination of all-purpose flour and whole wheat flour is used to make the aloo naan. Talking about the stuffing, there can be a number of different stuffings that can be used to make naan. This naan recipe uses potatoes for the stuffing. The potatoes have been flavored with fresh mint leaves, coriander leaves, and green chilies. The stuffing has the crunch of chopped onions and is flavored with spices. Stuffed naan, as such is an Indian bread but I would like to categorize it as a meal, especially when teamed up with some raita and salad. So do try this recipe for your weekend brunch, I am sure you will love it.

Leavening agent: Yeast is the most commonly used leavening agent for making naan. However, in this recipe, baking soda has been used. I do not like the soapy flavor of baking soda; therefore I have used Eno instead. If baking soda is used, its quantity of less than Eno and the same has been mentioned in the recipe card.

Potatoes: Boiled and mashed potatoes have been used to make the potato stuffed naan. It is important that the potatoes are mashed properly.

Onions, greens: To add bite and flavor to the naan chopped onions are added along with coriander leaves, mint leaves, and green chilies.

How to make Stuffed Naan?

As already mentioned, the stuffing for naan can be prepared using potatoes, as explained in this recipe, other than this, paneer, vegetables, etc can be used to make stuffed naan. You can also try and make naan using cheese as the stuffing.

How to serve Stuffed Naan?

Serve it with dal makhani and onion raita for a weekend dinner.

1.This recipe makes 6-8 stuffed naan, depending upon the size.

2.To make the dough for Naan: In a mixing bowl add 1 cup all purpose flour.

3.Next add in whole wheat flour.

4.1 tbsp of milk powder goes in next.

15.Cover it with a damp cloth.

17.To make the stuffing for the naan: In a mixing bowl add 1 cup of boiled and properly mashed potatoes.

18.In to this add 2 chopped green chilies.

21.Tear and add in a handful of fresh mint leaves.

27.After an hour, knead the dough again.

29.Shape it into a large rectangle. Use a chopping board or kitchen counter as the base.

30.Brush ghee on it generously.

39.Roll the portions into balls.

40.Divide the stuffing into 6 portions.

42.Place the stuffing in it.

44.Roll it into desired thickness.

45.Brush water on the bottom side.

47.Put it on a hot pan/skillet with the water side sticking on the hot pan.

48.Let it cook for a couple of minutes. Flip the skillet and cook the naan on the direct flame.

49.Cook till it gets black patches.

To make dough for Naan:

To make stuffing for naan: 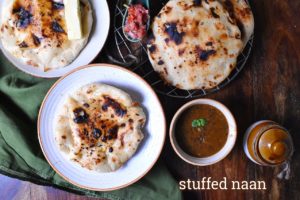 How to make Dough for Naan?

How to make stuffing for stuffed naan?

How to make Stuffed Naan? 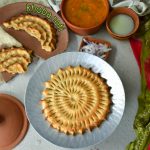 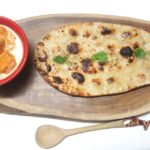 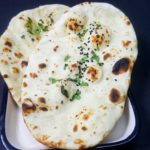 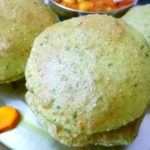 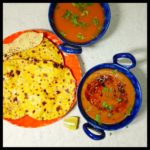