What is Mysore Pak?

A sweet from the South of India which has a very distinct texture and very good flavors is Mysore Pak sweet. Mysore Pak is crumbly and simply melts in the mouth. It is porous and soft. Mysore Pak recipe ingredients include gram flour, sugar and ghee, and oil. These handfuls of ingredients give a sweet which is so rich and tastes absolutely divine. Major credit to the distinct texture of Mysore Pak goes to one of the Mysore Pak ingredients i.e. ghee. Ghee is used in a good quantity and should not be compromised. Let’s see how to make Mysore Pak with the step by step pictures. This is the easiest Mysore Pak Recipe. It doesn’t call for any sugar syrup. It is a one-pot recipe for Mysore Pak, all the ingredients need to be added and cooked till the desired results are achieved.

Recipe for Mysore Pak calls for:

Gram Flour (besan): Regular gram flour (besan) is used to make Mysore Pak. It is important that the besan is sifted once or twice to get rid of the lumps, if any.

Ghee + Oil: I have used a combination of ghee and oil. It is because it gives the perfect texture to Mysore Pak. Mysore Pak can be prepared using only ghee. However, the texture would differ.

Sugar: Mysore Pak is quite sweet. Enough sugar is added for the sweetness as well as the texture. Granulated sugar is measured and then it is powdered.

Milk: I have used milk to prepare Mysore Pak. You can substitute milk with water.

Flavoring: Cardamom is used to flavor Mysore Pak. However, it is totally optional.

What is the difference between Mysore Pak and besan barfi?

Both these sweets are a combination of gram flour, ghee, and sugar. Still, the difference exists. The difference is in the texture and due to the ingredients. Barfi is soft. Mysore Pak is a bit crunchy and crumbly. Barfi is smooth. Mysore pak is porous. Barfi doesn’t call for much cooking after the addition of sugar whereas in the recipe for Mysore Pak the cooking starts after the sugar has been added.

How to make Mysore Pak? 3.Powder 2 cups of granulated sugar. Add it to the pan.

7.Also add in the powder of 2 cardamoms (elaichi).

10.Mysore pak will start to change its color.

11.Do not stop stirring the mixture.

12.The mixture should become frothy.

13.Once you see that the ghee has separated, stop stirring.

14.Pour the mixture in the greased pan. Do not press it.

15.Garnish with a few slivered pistachios.

16.Do not let it cool down completely. Cut it once it is warm.

17.Leave it to cool completely. 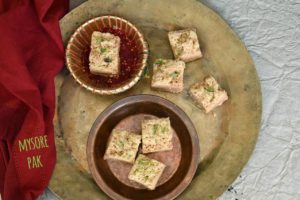 Instructions for :Recipe for Mysore Pak: 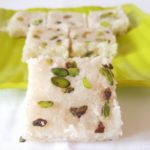 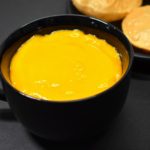 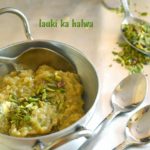 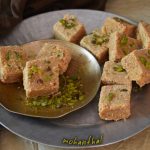 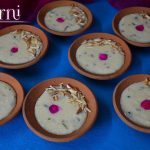 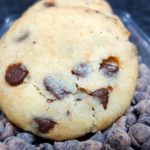